AGePOP gets hands-on in Leuven

In early July, the AGePOP early-stage researchers met up for their first practical training week in Leuven. The week introduced the young researchers to several techniques to investigate the gastrointestinal environment. But it was not only a chance to learn about intestinal secretions, and a few Belgian beers were also ‘researched’. 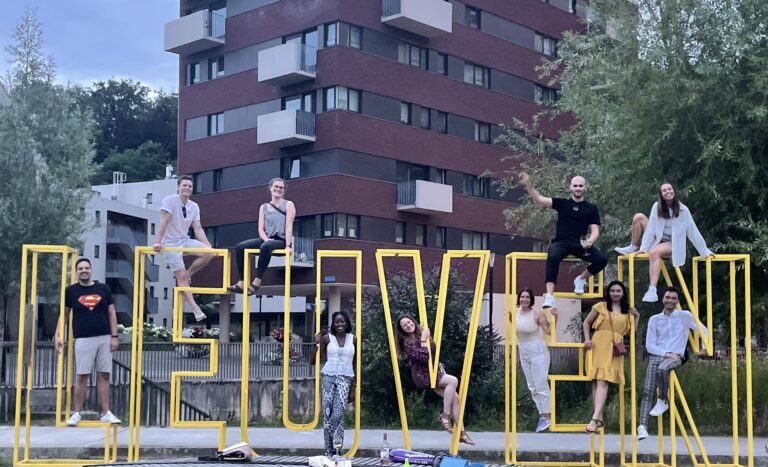 Eight PhD researchers travelled to a summerly Leuven to join their three colleagues permanently stationed in the Belgian city. The week kicked off with a guided tour of the city, strolling the ancient streets to learn about its rich history of wars, academic pursuits, and the famed kotmadam – or student’s landlady.

Professor Patrick Augustijns, Head of the KU Leuven Unit Drug Delivery and Disposition, formally welcomed the group in the afternoon, followed by a session of introductory lectures. The next morning the team headed to the UZ Leuven Hospital to start their practical training. The hospital forms part of the Gasthuisberg campus, perched on top of a hill next to the city. The term gasthuis stems from an old Dutch word for a hospital. UZ Leuven includes 2000 inpatient beds and is one of the best 50 hospitals globally.

On day three, the team donned their lab coats and headed to the unit of Drug Delivery and Disposition at KU Leuven to analyse the intestinal samples collected the previous day. The laboratory tasks included analysis of bile salts, pH, osmolality, and intestinal fatty acids. The event concluded with another two sessions of lectures, ranging in topics from drug formulation to improving medication use among nursing home residents.

The training week was also a chance for the researchers to meet again in person to exchange ideas and share experiences, often over a glass of Belgium tipple or Trippel. The last evening, the group joined the KU Leuven supervisors (Patrick, Christophe, Tim) for a meal at the Faculty Club, situated in the historic Groot Begijnhof.

After a jam-packed week, everyone headed home, slightly exhausted, but eager to apply their new learnings. We thank the team in Leuven for hosting an interesting and stimulating week. Everyone is looking forward to the next annual AGePOP week, again in Leuven, in early 2023.